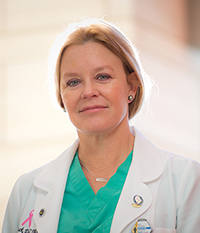 Relevant to the content of this CME activity, Dr. Beck indicated she has no financial relationships with commercial interest companies to disclose.