Materials should NOT be shared with those that are not registered for the conference. Poster abstracts are not proofed for spelling and/or grammar errors.

The poster and/or other information contained on this website may NOT be downloaded and/or used without prior written permission from all authors on the project. If you would like to be connected with the author(s), please email cme@dmu.edu.

Sleep Apnea (SA) is a common comorbidity in patients suffering from congestive heart failure (CHF), and is independently associated with renal dysfunction. Chronic intermittent hypoxia (CIH, a model of SA) is associated with autonomic dysfunction, abnormal renal hemodynamics, oxidative stress, and inflammation. The combination of these insults may underlie renal dysfunction in CHF patients with SA. This study sought to evaluate the role of CIH in promoting renal dysfunction in CHF. We hypothesized that oxidative, inflammatory, and pro-fibrotic signaling would be increased in kidneys of CHF rats, that this would be exacerbated by CIH, and that carotid body denervation (CBD) would have a salutary effect.

Adult male Sprague Dawley rats (n=7-12/group) were randomly assigned to sham, CHF, CHF-CIH, and CHF-CIH-CBD groups. CHF was induced by ligation of the LAD coronary artery (CAL) and CBD was performed 4 weeks post-CAL. Renal cortical tissue was assessed for mRNA expression using qRT-PCR. Data was analyzed using a single factor ANOVA or non-parametric test when appropriate. Expression of eNOS and NQO1 mRNA were significantly decreased (p<0.05) from sham in CHF, but not different between CHF and CHF-CIH or CHF-CIH and CHF-CIH-CBD (p>0.05). Fibronectin mRNA expression was not significantly different between sham and CHF but was significantly greater in CHF-CIH than CHF (p<0.05) and was significantly reduced by CBD (p<0.05). CIH may promote fibrosis in renal tissue of CHF animals by mechanisms related to downregulation of antioxidant defenses. Whether or not CBD can effectively attenuate tissue damage in these conditions requires further study. 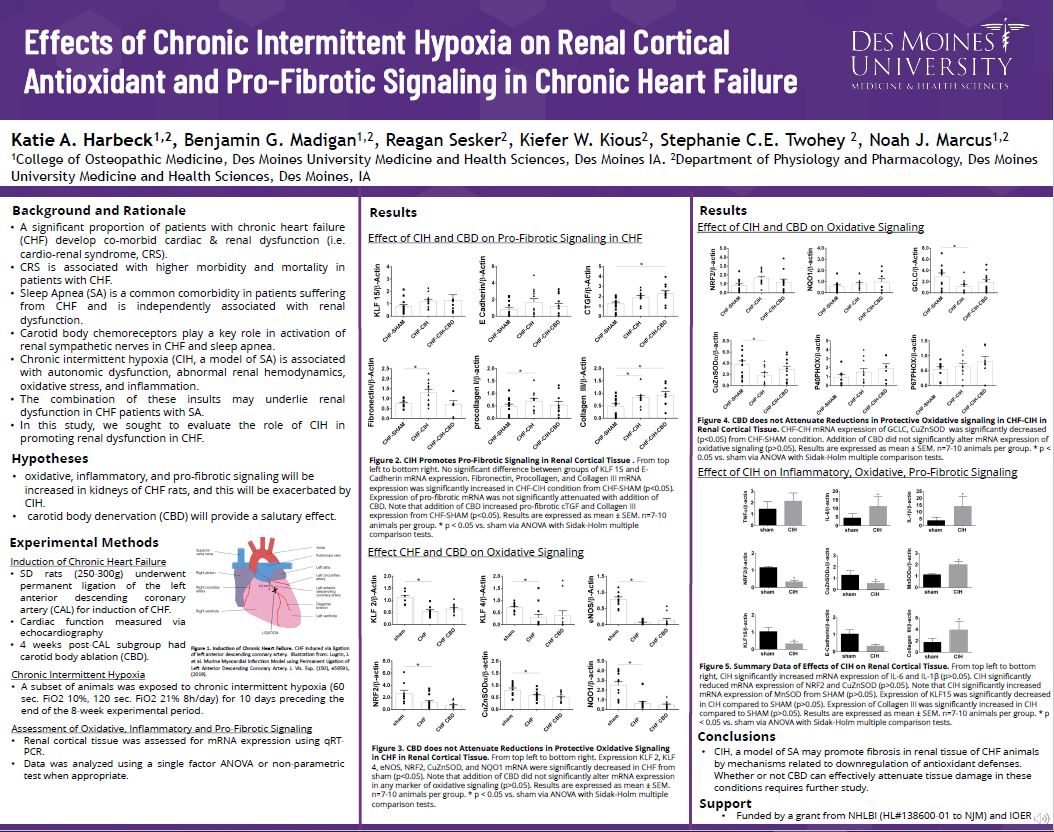